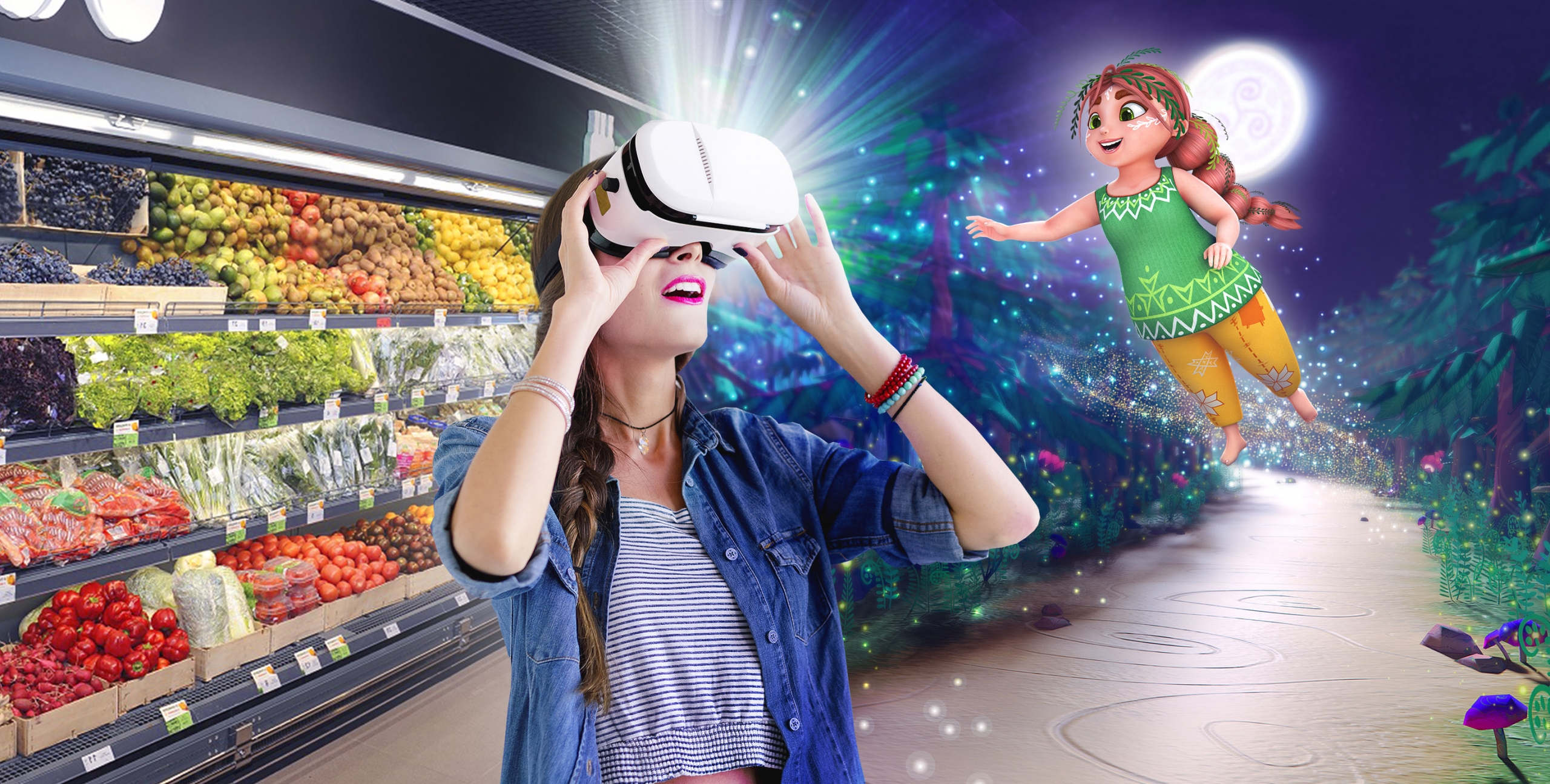 ATB-Market is an enterprise of ATB Corporation. One of the leading retail trade companies in Ukraine. Today, the company has 1000 stores located in 279 populated places in 24 regions of Ukraine, and the numbers keep growing. In 2020 alone, the chain opened another 100 stores.

Each day, more than 3 million customers visit this retail chain. The turnover in 2019 amounted to UAH 126 billion. With over 60 thousand employees nationwide, the company is the largest employer in Ukraine.

The company regularly runs loyalty programs, including innovative ones. We already worked on two of them in 2017 and 2018.

To run a pilot (the first in Ukraine) VR-based loyalty program and achieve the following goals:

The concept development and program implementation itself were carried out by the ATB marketing department engaging third parties. Within this project, we were the developers of the VR app. Naturally, we were happy to become part of the first VR-based loyalty program in countries of the Former Soviet Union.

We finalized the client’s technical requirements, improved and enhanced them based on our experience, and after all the approvals, we got down to work.

Also, we were motivated by the project’s key ideas – to raise environmental awareness among children and develop a respect for nature. The app features the avatar of the lead singer of band Kazka (the world-famous music artist) that flies through a magical forest, canyons, rivers, and towns. She destroys garbage, fights the fires, and overcomes different obstacles while collecting magic crystals and retail branded bags. After reading and playing the Kazka AR book, every child will understand the importance of keeping the environment clean and protecting our planet from the negative impact of various kinds of waste.

For the game, we created high professional locations with an emphasis on national peculiarities.

The working group app testing showed that the market still contains 5-10% of Android devices that don’t have the gyroscope or accelerometer. To solve this problem, we came up with a special functionality so that even without these features the user could play our game. Especially for this group of users, we developed a lite version of the game. In it, the avatar flew along a predetermined trajectory, and the user could tap a button to destroy the garbage along the way. The mobile app automatically could determine whether the device had a gyroscope, and depending on the test results, launched a full or a lite version of the game. This solution made it possible to involve everyone in the loyalty program.

The customers could buy a special chip at a promotional price of ₴ 0.01 for every ₴ 150 they spent or after buying participating items. After collecting ten chips, the customers could buy VR sets at a promotional price of ₴ 99. Moreover, the Kazka book cover itself and its five pages come to life in augmented reality. All animations are bright and interactive and help solve the environmental problem we are facing every day. This set included the branded self-assembly cardboard headset (Google Cardboard) into which the customer could insert a smartphone. The usual price for the VR set (without special chips) was ₴ 250.

Each set had a link to the free app. After downloading and launching it, and with a smartphone inserted in the assembled headset, the customer could enjoy an exciting VR game featuring eight levels. The third and next levels could be unlocked only after collecting a certain amount of crystals or with entering a magic rune. Users could find runes in the special book (Ukr. Чарголос). The book retailed in the same chain for ₴ 150.

The client has successfully run the first VR-based loyalty program in countries of the Former Soviet Union. The figures have not been disclosed but intentions to launch an extended version of the program in the chain's stores throughout Ukraine prove the success of the project.

Very soon, all customers of the Ukrainian ATB retail chain will enjoy the new version of the VR game. The program itself will also expand with a new AR part.

The VR-based loyalty program has once again proved the high efficiency of virtual technologies for retail chains.

A well-designed and well-implemented loyalty program brings both short-term and long-term benefits. The desire to get a reward as soon as possible boosts the average transaction value on the spot. And talking about long-term benefits: the program creates a positive emotional connection with the retail brand and is established for both children and their parents.