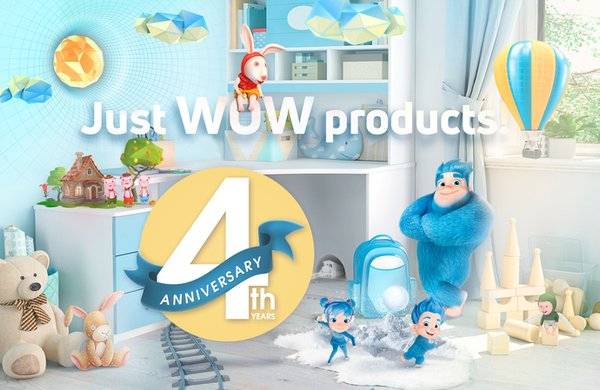 On September 26th Live Animations celebrated its four-year anniversary. Over this time, we have implemented more than 25 projects with augmented reality for customers from 51 countries. Our applications with AR are included in the top Play Market and Google Play. And the total number of downloads exceeded 12 million.

In 2015, our My Yeti ice cream case in augmented reality received gold at the International Advertising Festival in the nomination "Best Innovations in Advertising".

With the help of augmented reality, we animated a series of New Year's gifts for GOTEK. In 2016, a collection of Christmas packages with AR won gold in an international contest from the World Pack Organization in Frankfurt, and in 2017 won the World Contest for the best packaging of the "World Star".

In 2017, we also animated the popular children's book "Alice in Wonderland", adding illustrations with augmented reality. The first circulation of $ 275,000 was sold out in 2 weeks. In early 2018, we released a continuation of the popular story - "Alice through the Looking Glass". For this book the new edition of Live Animations has developed 2 times as many illustrations in the AR - 11 "live" images including the cover. And in total, 715 000 copies were sold for 2 months, which once again proves that a correctly constructed marketing strategy and augmented reality make an explosive mixture!

On June 7, 2018, a series of children's fairy tales with augmented reality by Live Animations and the Little Hippo publishing house were awarded the Parents Choice Award, the prestigious world award in the United States. Every year, thousands of participants from different countries take part in the competition and the committee chooses the best products in each category.

Every day we create real WOW products with AR for children's and family brands. And all the best and grandiose is only ahead, we are not going to stop here!