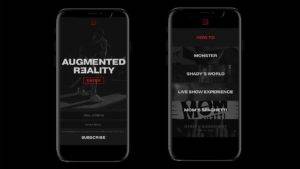 Eminem’s revolutionary concert with use of AR

Application of AR-visualization can radically change perception of the events which are going on at the concert – Eminem’s fans became pretty sure of that. Augmented reality rendered the rapper’s show the most spectacular event of the year.

Seeing the favorite performer in person– is not a peak of fans’ dreams anymore. Recording the whole concert on its phone, posting it simultaneously to Instagram – it’s a principal activity, of any singer’s numerous army of fans in 21 century. Most of the musicians still either did not react or tried disciplining their fans.

Popular rapper Eminem, who gathers full stadiums al around the world, decided not to resist to his fans, but give the smartphones’ users experience new emotions represented by unique visual effects. Augmented reality (AR) has helped creating more musical impressions.

At Koachella festival Eminem has already tested on his fans the new visual effects. The concert received god promotion due to the innovations implemented. And now AR –effects will supplement the singer’s shows in his American and European tours.

What impressed the spectators most – the giant rapper «shoots down» helicopters, crushes skyscrapers and manipulates by huge knives and chain saws, which «threaten» to spectators. From the stage rockets were «sent» into spaces, imitating the catastrophe one second after –« falling» of jet packs into the crowd and many others.

The concept of use of AR in the show was connected to location. That is why all the people who stand on certain distance from the stage could use all the advantages of the program’s new format. «As for fans will use their smartphones, anyway better is not to fight it, but join them and redirect their efforts in the way we wish», - Eminem’s managers believe and place a bet on unusual, but as the results show, a win-win marketing strategy.

Drive
Studios company has designed special application Eminem
Augmented. The designers succeeded combining in one app all latest technologies, applicable for today within the scope of augmented reality, and also transformed them into visual effects on the concert. The show was much talked of, it was called a revolutionary step in process of «animating» music for a viewer.

By the way, Eminem’s example, who has applied AR in his show, is ready to be followed by Gorillaz and Bjork.