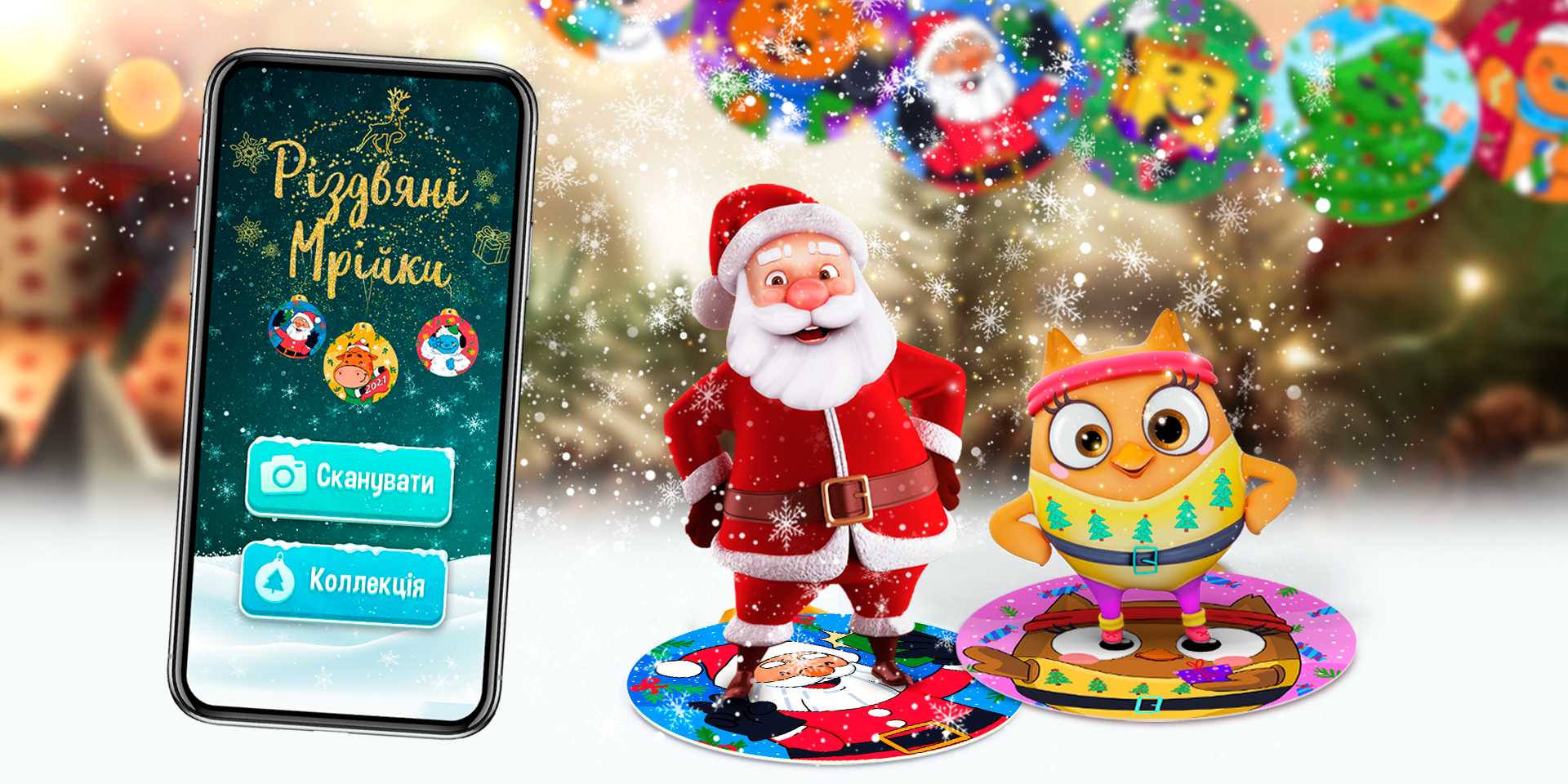 Auchan Retail Ukraine is a part of Auchan Group, an international retail chain based in France. This retail is ranked as the 11th largest food retailer in the world and offers all forms of retailing: from hypermarkets to ultra-convenience stores. Today the Auchan network is represented in twelve countries in Europe, Asia, and Africa.

Auchan Retail Ukraine is represented in 9 cities by 19 hypermarkets, which employ 6,000 people.

It was the company’s first loyalty program launched in Ukraine.

Auchan was focused on handling a Christmas loyalty program with Augmented reality technology. They wanted us to develop it within 6 weeks (these were very tight deadlines). The program had to combine a reward system, that is already familiar to Ukrainian customers, with augmented reality solutions.

The main client’s tasks were the following:

To accomplish the task on time, we, in cooperation with the Auchan marketing department, decided to combine the classic Christmas theme with the sure-fire lottery.

The customers could buy Christmas cardboard ornament in opaque packaging at a promotional price for ₴ 0.49 right at the checkout for every ₴ 400 (₴ 200 in My Auchan convenience store) they spent or for buying participating items. Besides, the customers who paid with a Visa card got one ornament for free.

One of the sides of each of these ornaments features one of twelve unique characters designed exclusively for this loyalty program. On the other side is written the character’s name and his biggest dream for the next year. Also, the customers right at the checkout could buy a special cardboard Christmas tree for collecting these ornaments.

In each of the cities where Auchan hypermarkets are represented, one customer could win a three-hour limo ride with Santa and the Elves, a joint photoshoot, lots of sweets, and festive fireworks. To receive the prize, the participant had to find a special Christmas ornament featuring Auchan golden bird in the same opaque packaging as the rest of the ornaments. So it was impossible to falsify the results.

To implement the innovative component of this loyalty program, we have developed a free Christmas Dreams (Різдвяні Мрійки) app. The user had to launch it and point the phone at one or more ornaments. Immediately after that, the characters featured on them came to life in augmented reality and began to dance to cheerful music. Besides, the user could choose the music for these dances from the drop-down list and, using a special menu, add various special effects to the animation.

All the dancing characters were interactive - by tapping them, their moves became more active and faster, and additional visual effects appeared around.

The special feature of this app was the ability to simultaneously animate all twelve characters in augmented reality. This technology is still rarely used.

Within the loyalty program, special stickers featuring one of the characters - Frosty - and a download link to the app were pasted right on the hypermarkets’ floor. With the app running on the phone the users through their camera could see in augmented reality Frosty coming to life and inviting them to take a joint photo or shoot a video. Later these results could be shared on social networks.

The Live Animations team performed a full range of services within this loyalty program. Ranging from the idea development to limo ride arrangements in all participating cities.

We created a landing page for the loyalty program with all the necessary links and characters’ images. Also, we actively promoted the program on Live Animation’s and Auchan’s Instagram profiles. Besides, we provided the client with all video and photo materials to promote the program on Auchan’s Facebook profile.

In less than seven weeks, more than 2,500,000 ornaments were sold and the app was downloaded 30,000 times. Moreover, the participating partners were very satisfied with the results. The sales of their products have grown significantly.

The main prizes of the program - ornaments with the Auchan Golden bird were sold in each of the cities. The nice thing is that in all the cities it was the families with children to win the prize. They had a wonderful time.

The loyalty driven by customers’ emotional connections to the retail brand is best proved by one of the reviews: “This is a great app, a child (3 years old) is delighted, we’ve collected 8 ornaments so far and everything is perfectly scanned at the same time. Now we want to collect all 14 pieces”. Thank you for making my baby so happy 😍 "

Auchan’s management was satisfied with both the economic benefits from the augmented reality loyalty program and the participating customers’ emotional response. Though this was the first time the Auchan-Ukraine launched this kind of loyalty program, its positive results led to the fact that next year the company is already planning to launch at least two loyalty programs targeting families with children.

The following factors contribute to such results: