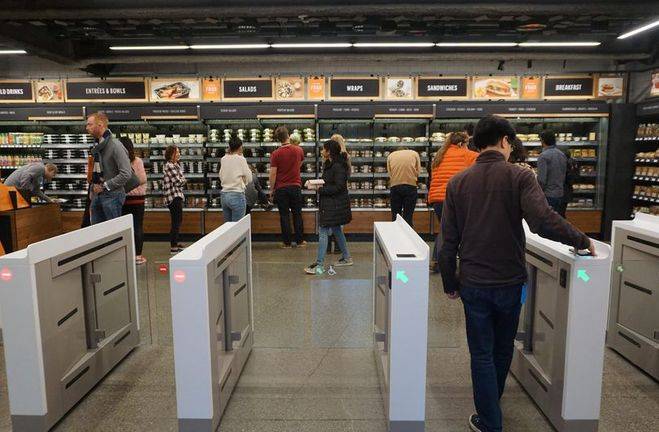 The supermarket was opened on January 22. In order to buy goods in the shop you should download a mobile app. While entering and exiting the store you should launch a mobile app, scan a code with a smartphone using special turnstile.

Clients leave the supermarket and the corresponding value of purchase is transferred out from their bank cards which are attached to their Amazon accounts.

The system works on the basis of hundreds of detectors and in-depth analysis technology. It tracks not only those goods, which clients put in their baskets, but also those, which he or she has eventually decided not to buy. For this purpose on every shelf special scales are installed.

During 2017 the supermarket had been actively tested. Employees of Amazon imitated goods purchase.  Initially the technology unraveled while tens of buyers present in the shop at the same time. Errors used to occur when children put on the shelf some good on the place of other one. But the company succeeded to solve the problems.

At the end of last year a few employees dressed in Pikachu, main character of well-known cartoon, and acted as if they were buyers. Although before the sensors displayed errors while presence of a few buyers having identical appearance, this time they worked properly.

The company claims it does not use facial recognition system. But the journalists who attended the shop note there are many cameras.

The supermarket’s area is 150 square meters. Its working hours are from 7 a. m. to 9 p. m. It‘s possible to buy as ready-made dishes so their components, in particular AmazonMealKits.

The service personnel are still present in the supermarket. Cooks prepare tasty dishes in a kitchen. An employee in alcohol department checks the customers’ age.

A shop like this was opened last year in China. While entering the store a client applies QR -code. In order to buy some goods a client should scan it.

Interesting automatization strategies are also offered by other companies. Before supermarket network Lawson introduced an innovation from Panasonic — designing Rejirobo. These are computer-assisted cash desks with option of goods packing. SimpleRobotics company has created Tally the Robot, which checks the shelves with goods.