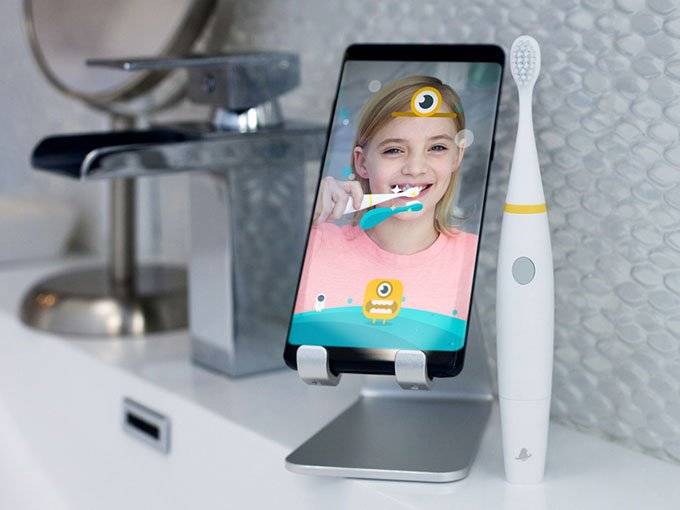 Kitten Planet company, which was created as a part of Samsung's C-Lab project, has developed an augmented reality toothbrush that teaches and motivates children to brush their teeth better.

The brush was called Brush Monster. It costs $ 49 and connects to smartphones and tablets via Bluetooth. The augmented reality feature is launched through an adjacent app for iOS and Android.

At the same time, animated characters make the process of brushing more fun, and the effects of the front camera contribute to the development of their social activity. The effects of AR change every day, allowing children to have a new experience each time.

"At some point, every young parent struggles to get their child to brush their teeth. Since we are all parents, we wanted to solve this problem by creating a product that makes brushing teeth a dynamic, engaging and fun process," said Jongo Choi, the co-founder and CEO of Kitten Planet.

The company reports that more than 10,000 users have access the beta testing of the application. And now each of the three users uses the application daily.

"With the help of the augmented reality technology, Brush Monster walks children through the whole process of brushing their teeth in an entertaining format, gradually showing the importance of this process, and it really works," said Choi, whose company was chosen to join C − Lab in January of 2016 and subsequently was launched in April of that year. "In the end, it contributes to forming a healthy and necessary habit that adds independence and confidence to the child at a very important stage of development".

Kitten Planet demonstrated its technology at CES 2018, and the brand will start a crowdfunding campaign for Brush Monster at Kickstarter. In March, the product was launched in South Korea, and the device should enter the wide market in July of 2018