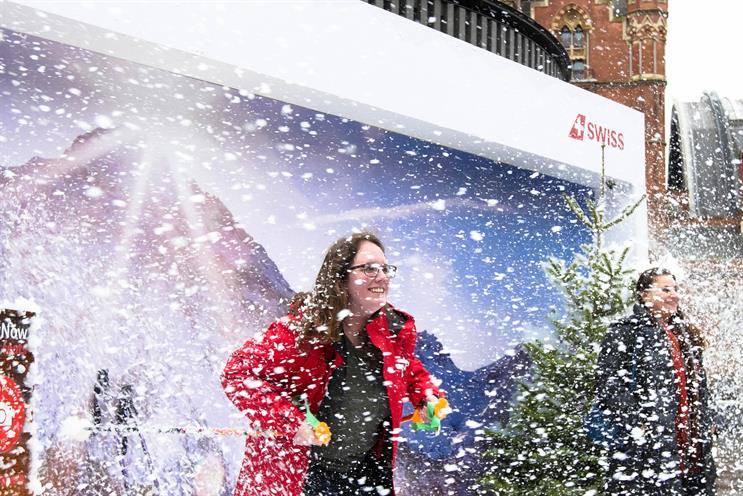 An incredible marketing move that comes from Switzerland.

The original advertisement of the largest Swiss company appeared in the UK. Passers-by can feel the spirit of the Alps, hitting a snowstorm with artificial snow. The “weather” source is a billboard located on the territory of London's King Cross Railway Station.

Creative Agency “Agency Space” acted as a partner of Swiss International Air Lines. Thanks to the cooperation and the use of an interactive billboard, the Swiss company plans to increase the number of tickets sold for skiing.

Anyone can bring snow. You need to be near the billboard, use the advertising application and tweet, putting the #SnowNow hashtag.

Billboard has an interesting subtext, as it sneers at the British approach to acquiring vouchers: at the last moment on the Internet. SWISS offers fast booking of tickets. The motto of the company: “snow in one click”.

“Agency Space” analyzed the experience of clients' behavior. The agency's mission is to arouse wide public interest and increase the number of tickets sold by a Swiss company to the Alps.

The results of the advertising campaign have two directions. First, information about an interesting novelty is quickly spreading in social networks. Secondly, articles about the original billboard appeared in the London press.

Senior manager Swiss of marketing KhloiRavat commented on this innovation. According to him, the advertising campaign is an original, interesting and fun advertisement.

David Atkinson, managing of partner of “Space”, said that SWISS offers more than 180 flights per day from London to the Alps, and skiing is included in its tariffs. The advertising campaign #SnowNow is an opportunity to separate the offer of the Swiss company from the everyday ideas of competitors.

Atkinson predicts that thanks to the advertising campaign, the British will be more active in ordering tickets for SWISS. More customers will feel the unique atmosphere of the Alps.

Also, the Swiss company returns to each participant a mini-blizzard of 25 British pounds from the cost of the voyage. 5 lucky people will get a free trip for two to the picturesque Alps.