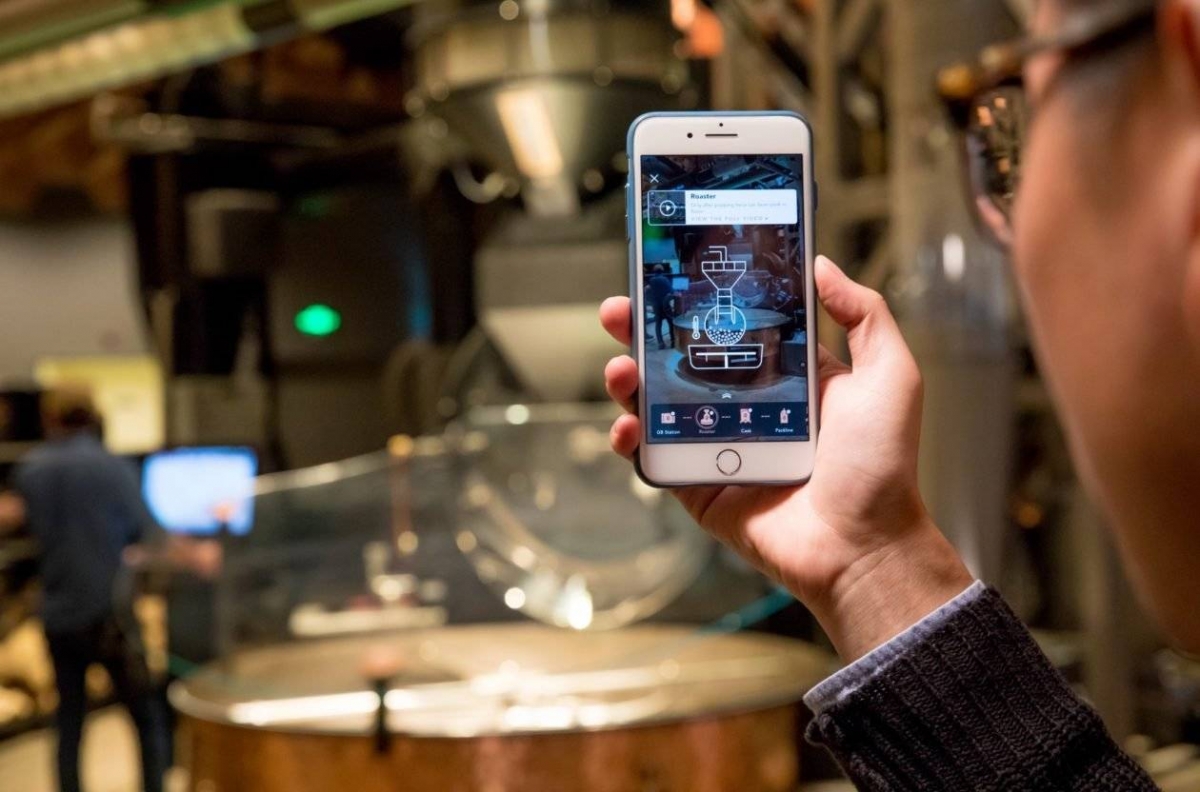 The coffee giant  will open the Starbucks Reserve Roastery in Shanghai, a 30,000 square-foot retail location that the company describes as the “first fully immersive coffee wonderland in China” and its “most ambitious project ever.”

Using a custom Roastery smartphone app, customers can walk around the store and point at different features with their smartphone to learn more information. The app incorporates a digital menu and also lets customers unlock virtual badges.

The Shanghai Roastery, located in the company’s fastest growing country, is double the size of the original and is Starbucks’ largest retail space worldwide. It features three coffee bars offering multiple brewing methods; a 3D-printed tea bar; an Italian bakery, Princi; and a ceiling built with 10,000 handmade wooden hexagon-shaped tiles. There’s also a two-story, 40-ton copper cask with more than 1,000 hand-engraved Chinese stamps that tell the story of Starbucks and coffee.

China represents Starbucks’ fastest-growing market with more than 3,000 stores across 136 cities, and 600 alone in Shanghai. The company opening one store every 15 hours in China, where there are nearly 700 million smartphone users.

In July, Schultz hinted that Starbucks would partner with more Chinese tech companies “based on the fact that the consumer in China is well more advanced than the U.S. consumer in terms of being a digital native.”

The in-store AR integration is the latest digital innovation to come from Starbucks, which has become much like a tech company than a simple brick-and-mortar coffee retailer. It is also another example of Starbucks tying together a physical store experience with new technology — Starbucks CEO Kevin Johnson talked about this at the GeekWire Summit in September.

“One, you must be focused on experiential retail that creates an experience in your store that becomes a destination for the customer,” Johnson explained when asked about what physical retailers must consider in 2017. “And number two, you have to extend that experience from brick-and-mortar to a digital-mobile relationship. So our approach to this is investing in elevating the experience we create in our stores, and investing in the digital-mobile connection we have with our customers.”

Johnson, a respected veteran tech executive who replaced Schultz as CEO last year, also talked about the company’s investment in new VR and AR technology at the Summit. He noted that Starbucks uses virtual reality to enhance its store design process.

“Our designers can now walk a store and see what it will look like before we start deploying capital to actually build it,” Johnson said.

The company has also experimented with AR on its cups. Johnson added that Starbucks is experimenting with virtual reality content — for example, taking customers to the company’s coffee farm in Costa Rica so they can learn more about the coffee-making process.

He also noted that the Roastery stores — Starbucks plans to open more locations next year in Milan and New York City; and in Chicago and Tokyo in 2019 — can act as a testbed for new technology.

“You’ll see us invest in taking the innovation we get from the Roasteries and propagate it throughout all our Starbucks stores around the world,” Johnson said.

Starbucks is not the only retailer to use VR and AR as ways to engage customers and ultimately sell more products. IKEA lets people envision what furniture will look like inside their home; Lowe’s debuted an app that helps people navigate its stores; Walmart lets people engage with in-store signage to create an “adventure”; and Chinese online grocery site Yihaodian planned to open 1,000 augmented reality supermarkets back in 2012.